Showing posts from 2009
Show all

- November 04, 2009
The other day I noticed that I hadn't updated this in awhile and I was also thinking about this good old city of Regina, Saskatchewan. I felt like promoting some of the local talent here that isn't just a band. So here are a few Regina electronic artists that deserve a little more of a showcase.

Hopefully I can get some feed back and see if any actually like a few of them. You guys can download them from soundcloud I believe. Also, these aren't really finished finished tracks. But, I guess sometimes after putting them out there is no going back.

I just finished up two week or so of inspiring festival going and I can see more music starting to bubble up right away that I have some time to relax a little more. I hope to start getting some more complete ideas down on here as well. I'm also feeling like I may or may not start another blog that is more geared towards my work/tech research. But, I'll probably wait until I start post…
1 comment
Read more 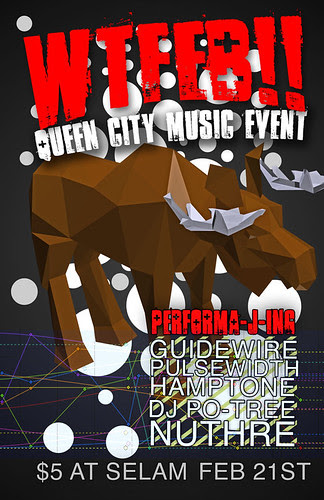 So,
A little less than a month ago I held a little musical event called "WTFeb!!!" and we had some great performances from Hamptone, Pulsewidth, Guidewire (me), Dj Potree, and Nuthre.

And a link to a stream of the five performances:
http://tinyurl.com/dgmpjt

I've also posted up an old album of mine called "Psycho Acoustic Algorhythms"
which can be found here http://ryan.ameba.ca/guidewire/paa_guidewire.zip
tell me what you think

- February 03, 2009
So, I've been exploring the technicalities and coolness of "Augmented Reality" AR at my workplace over the last week or so. It's a process of basically overlaying 2d or 3d images onto video of the world in "real time". This can be done using a video camera and a computer which could then lead to some kind of headset in the future. The process has been around for a number of years, but recently it has become possible to do it relatively easy on a website.

here is a video that got our curiosity going

--
It's designed using Adobe Flash, a code library called papervision3d , and another library calledFLARToolKit based off of ARToolKit.

Saqoosha, who translated the code to work with flash, has some sample code to get started
http://saqoosha.net/en/flartoolkit/start-up-guide/

There is a nice starter article that I've been going back to more than once from Mikko Haapoja out of Toronto:
www.mikkoh.com/blog/