Showing posts from 2007
Show all

- November 23, 2007
At work over the past little while I've apart of a little puppet show.

Here is one video


It's been pretty fun putting these shows together and it's kinda left just our regular old discussion on the tenthdimension.com site.

You can check out our other videos here

- September 13, 2007
So, I've been using google reader for a number of months now and I'm starting to feel like there is to much info for me to look through. I have this feeling like I should look through it all, but I don't have the interest or time. Maybe the next step for google is to synthesize all the content from google reader and give you the "jist".

Besides that, I've been "building" music off and on for the past little while and I probably have more to show in the next little while. I've been trying to "push" a show that I did. If you go here you can download my show. It was from a show I did at Regina's Cultural Exchange.
Post a Comment
Read more

Internet TV and what ever else

- August 20, 2007
So, recently at my work I've been playing around with doing live streaming 'tv" on the internet. We've set up a little area at our studio with a green screen, camera and a microphone. If people are interested in seeing me talk about reality, music and current events come and check it out.

- July 05, 2007
All sorts of new projects on the go for the summer. Not totally ready to be to formal in my explainations, but I have plans on making a "zine" of some kind. I've been sitting on that idea for some time now, but I think I have a solid place to go with it. I found this idea for a "poster" zine that is a large scale poster with a number of articles. It'll be focused on Regina and I'll be looking for a few people to contribute their thoughts. I'm not totally sure what the best way to get people to submit is. I've tried before and people never really provided me with content. It could have been because I didn't clearly state dates and methods for giving me stuff.

I guess I would also love to do some more music creation and performance during these summer months. I should get out of my house, but some times creating is so much more interesting than interacting with others. I've recently finished putting up an album of mine called "…
Post a Comment
Read more

- April 26, 2007
Some of you may have noticed the side of my blog. If you've subscribed to it using an rss reader of some kind you probably haven't. I just found out yesterday how to add a tag/label "cloud" to the page. It grabs all my blog labels and arranges them nicely into what I refer to more often. It's all the rage now-a-days.

- March 21, 2007
So, to create a little self reference of some kind I guess. I started up a new blog a month or two ago called saskpool.blogspot.com It's intended to be a place to show off some of the artists found around Saskatchewan. I would like to get a bunch of contributors from around the province so that it's not just one persons promo page, but something for everyone. Also, I've created a little social network site at thepool.ninq.com that will hopefully be a place for people to come together and discuss and share.

And on another note of sorts. Some may have noticed that I've become a google reader fan and I've added a little "widget" on the side of the blog that shows some of my favourite news stories of the minute. If you don't know much about feed readers and rss and all that, look it up! 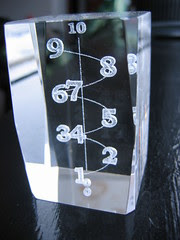 Here is a little video I made for a song my boss wrote.

Also, here is a little crystal I helped make to go along with the project.

- February 04, 2007
I went to the sask youth summit this weekend in Saskatoon. 400 or so youth from around the province came together to talk about the future of our little homeland. There were a lot of smart interesting youth between the ages of 19 and 30. If you go to the website you can read a little info on what did happen http://www.saskyouthsummit.ca/.

I was recently shown this wonderful, but scary, video of the some new 3d modeling technology that will literally change the face of film, photography and criminal investigations.

I'm pretty intrigued by this technology and probably won't get much of a chance to use it myself, but it's certainly going to push the boundaries of what we can believe from now on.

I guess my second thing that has been on my mind today was the little old place of myspace. It seems like myspace is becoming more and more widely used, but it doesn't seem to really be enhancing its operations at all for the considerable amount of people that are using it. I know that it's free and people can use it to promote themselves, but that doesn't mean that people shouldn't get something more usable than what's provided. In this age of web design I don't think any site should be able to get away with what they do. Myspace should be challenged and…
Post a Comment
Read more

So, the other day at my work we came up with this crazy idea to put some 3d objects into crystal. There is a way of taking a 3d picture of yourself and have it put into a crystal using a laser. I went and did a little looking around and found this cool site where this person puts mathematical objects into crystal. SUPER COOL!!

http://www.bathsheba.com/crystal/
Post a Comment
Read more
- January 10, 2007
I just saw this TEDtalks video on a new multi-touch interface that is going to change the world...
It is the technology that is part of the new iPhone...

I should also apologies for my incorrect statement that the iPhone was at CES...it was of course at MacWorld.

So, today I was just surfing the good old net and spotted that Apple announced their new iPhone. I'm trying not to like that company too too much, but they deserve credit some times.

It looks to be pretty damned sexy. I'm supper in love with the use of tilt sensors to re-angle the screen for the user.

This is part of the whole Consumer Electronics Show (CES) that's on this week in Las Vegas.
I'm excited to hear what else is up and about.
1 comment
Read more
More posts